This rugged route was immortalized in the book “White Slaves of Maquinna” as the ridge that ancestral Chief Maquinna sojourned on. It follows the ridge that rises between the Leiner and Tahsis River valleys, directly east of the village, on Mowachaht/Muchalaht First Nation territory.

While the first part of the hike is moderately steep, one is rewarded by increasingly spectacular views of Tahsis Inlet and the surrounding peaks. The lower section is forested with Douglas Fir with some Dogwood, rare on the west coast. Above 450 metres the ascent is more gradual and the route is mostly a semi-open sub alpine environment. Water is rare and should be carried. For the most intrepid mountaineers, an 8km (5 mile) hike along the gently undulating ridge brings you to two small lakes below Mount Leiner which are 1,456 metres (5,000 feet) high.

To find the trailhead, leave Tahsis (toward Gold River) but stop where the road leaves the inlet and head inland, within sight of town. The trail entrance is flagged and heads uphill from here. It is considered a route as it is flagged only up to 800 metres elevation (2,600’) but can be followed further in clear weather by staying on the obvious ridge line. 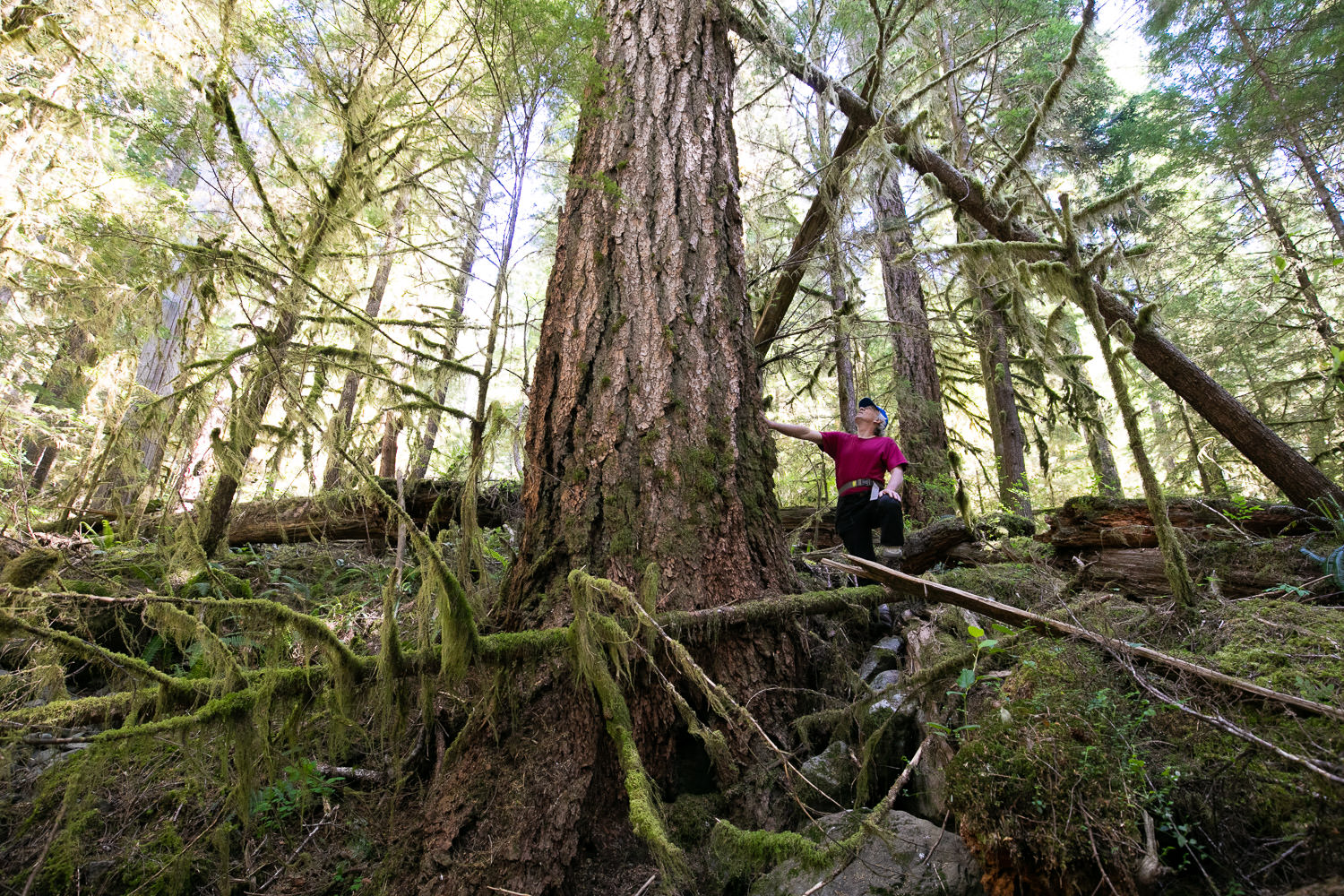 This ancient trade route was used by the ʼNa̱mǥis & Mowachaht/Muchalaht First Nations and crosses Vancouver Island from its southern terminus in Tahsis. The route followed the Tahsis River to its headwaters and over a pass to Woss Lake, and then down the Nimpkish River to the ocean on the northeast side of Vancouver Island near Alert Bay.

Although not maintained as a marked route, this trail begins beyond the north municipal boundary, past the Comox-Strathcona waste management landfill. Follow North Maquinna Street to the north end of town and over the bridges. The route follows the flat valley bottom, often following the Tahsis River or its dry (in summer) watercourse. Occasionally it follows old remnants of a logging road left from when the valley was logged in the 1940’s. Much of this road has been eroded over time.

Spectacular views of Rugged Mountain (1,875 metres, 6,151 feet) greets visitors as they pass the base. Mountaineers may want to use this route as an access to the aptly named Rugged and its glacier, the largest on Vancouver Island. The glacier is a steep hike of 1,000 metres (3,200 feet) elevation west of the highest point on the trail; there is no marked route up, refer to a topographic map.

The Woss Lake Trail ascends steeply only at the headwaters and reaches a high point of 550 metres (1,800 feet) before descending to Woss Lake at 140 metres (500 feet). There are no roads from this end of the lake (still within Rugged Mountain Provincial Park) but the other end of the lake is road-accessible from Woss. Arrange for boat pick up from the Lake end of the Trail.

The total trail length from Tahsis to Woss Lake is about 12 km (7.5 miles). Water is available along much of the route and there are some nice wilderness camping spots in the upper reaches of the Tahsis River. There are opportunities for trout fishing in the river pools here. The trail is moderate in difficulty. 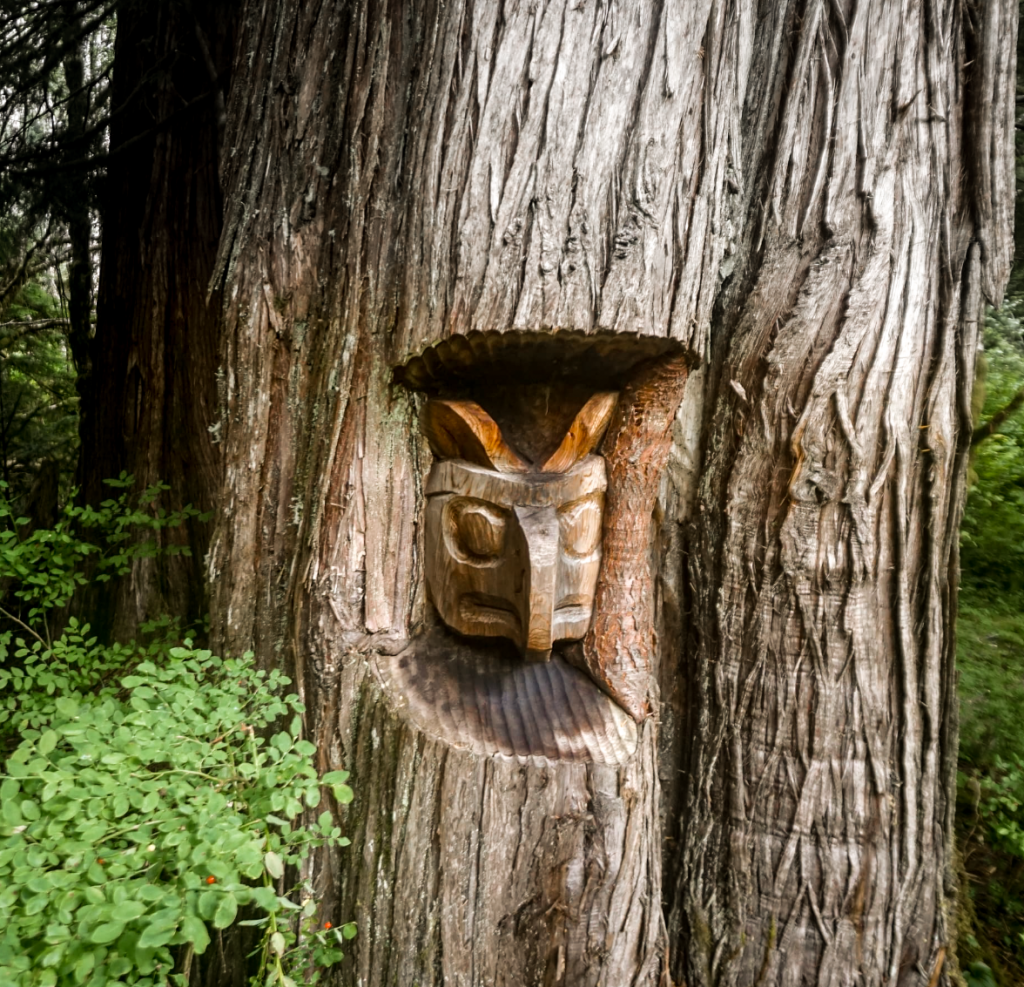 A great place to start a more extended hike is from West Bay Park, just past Maquinna Resort at the end of town. There are shorter trails accessed from the turnaround at West Bay, or you can backtrack and go up the logging road (only during weekends when there is no active logging taking place) and head for the Coral Cave or the Lookout. Either destination is about 3-4 hours to reach for an experienced hiker, and both spots offer breathtaking views of the Tahsis Inlet. For more detailed directions check out the caving guide and directions to Coral Cave. 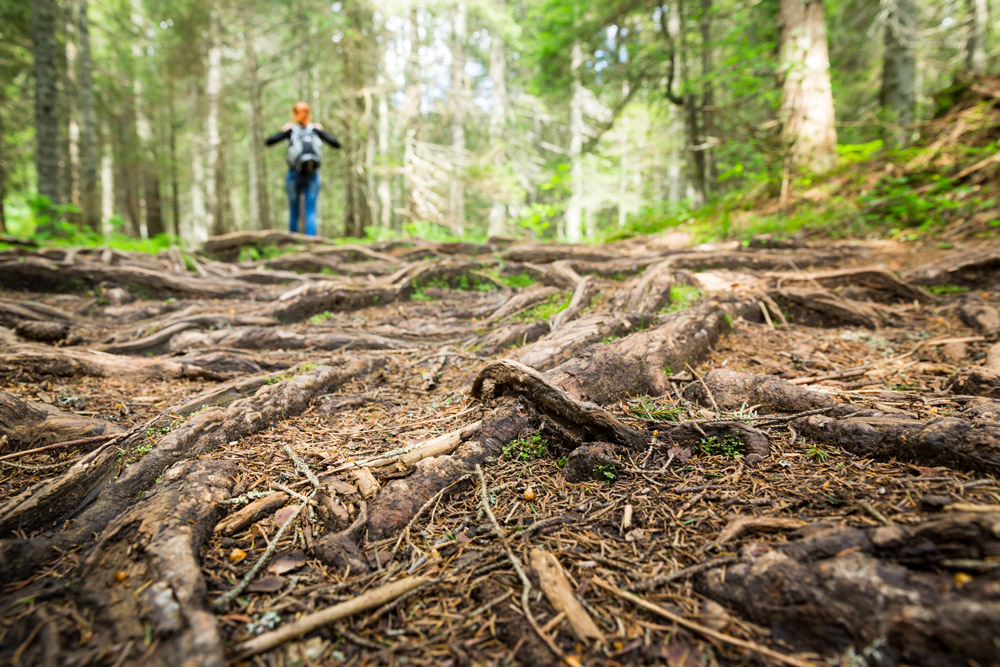 Hugging the west coast of Nootka Island, the Nootka Trail provides an unsurpassed wilderness hiking experience featuring long beaches, secluded bays and spectacular headlands jutting into the Pacific Ocean. The trail is not in a park and is maintained by volunteer efforts but is a relatively easy hike which never rises more than 50 metres above sea level. It is not uncommon to see whales including Greys, Humpbacks and Orcas close to shore; bears, cougar, elk and wolves are some of the larger forest creatures although rarely seen. Old indigenous sites are found along these shores, often marked only by old shell middens or whale bones – please do not disturb. The forests are mostly old growth stands of spruce, hemlock and cedar. 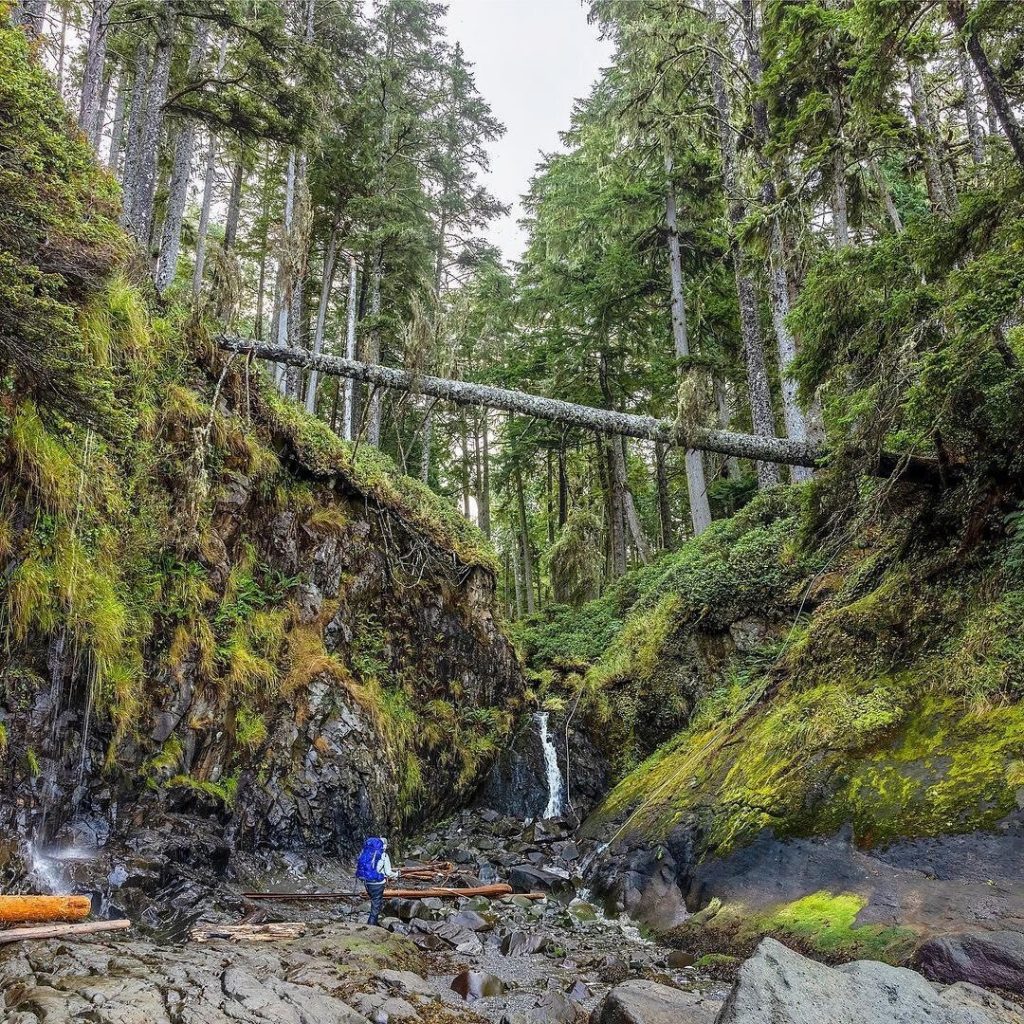 A water taxi (Shorebird Expeditions) takes hikers to either trail head (Louie Bay or Yuquot) from Tahsis or there is float plane flights (Air Nootka) from Gold River. Purchasing a tide guide before your trip is mandatory as you can use low tides to follow beach flats which are otherwise inundated, making hiking much easier. Five days or longer is needed to complete the hike. Recommended footwear are hiking boots and a sturdy pair of sandals with wetsuit booties for wading in the cooler weather. Some creek crossings also require low tide to cross and a sturdy pole can be useful for balance if the water is high. At places where the route leaves beaches, hanging fishing floats mark the trail egress. Bring potable water, as drinkable sources can be infrequent.

The northern end of the trail is accessed by walking the south side of Louie Bay at low tide. Be prepared to wade through a channel to the west coast. The south end is accessed from the dock at Yuquot. Yuquot is a National Historic Site of the Mowachaht/Muchalaht people who lived here for over a thousand years, and the church is worth a visit for a bit of the local history. Fees are payable to the MMFN at www.yuquot.ca. The north end of the trail features low headlands and sandy coves, while beaches dominate the central portion. A popular camping spot and swimming hole is Calvin Falls, a 12 metre high cascade dropping directly onto the beach. The southern third is dominated by a series of spectacular headlands formed of volcanics mixed with marble, often with large sea caves and beaches tucked into tiny coves.

There are no facilities along the trail although there are some private cabins at Beano Creek (do not disturb) and close to Yuquot – the latter are available to rent. It is useful for hiking groups to carry a VHF radio or satellite-phone for emergencies. The route can become dangerous in severe storms, mostly in winter. Guidebooks are available for this trail and a good historical book to read on the way is “White Slaves of Maquinna”, written about life in Yuquot and Tahsis in the late 1700’s, by a sailor captured by the Mowachaht people in the early 1800’s.

Ascending the Cardiac Climb stairs brings you to the old townsite. This neighbourhood is very rewarding for those interested in architecture, as it features old float homes from the 1940’s (oldest in Tahsis) and the Heritage Building housing St. Joseph’s Roman Catholic Church.

Continue on down South Maquinna Drive to Tipperary, then walk around the original townsite to see homes from the 1950’s plus a spectacular view of the inlet from Tipperary Park at the top of Princess Victoria View.

As South Maquinna Drive heads down toward the Public Boat Launch, there is a picnic table and sign marking Ubedam Trail… a short hike up to Discovery Crescent and a popular shortcut for locals. 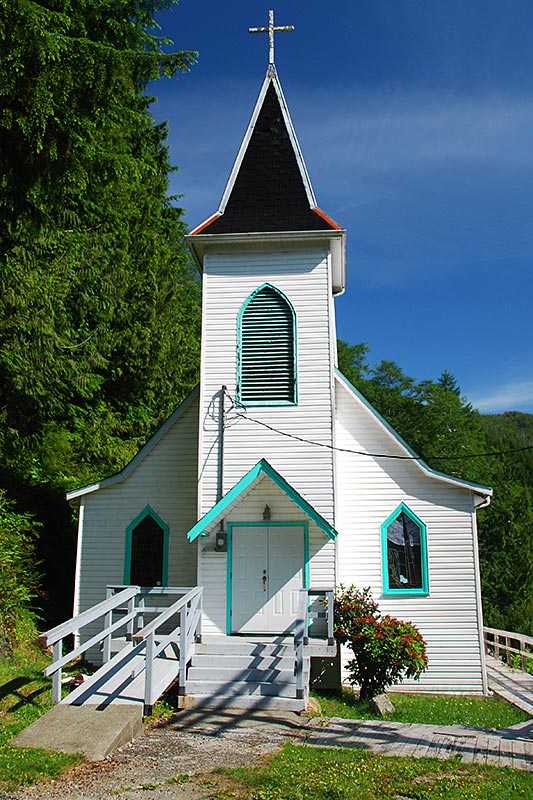 bULL OF THE WOODS TRAIL

A short drive past the old Maquinna Resort you will see a sign for Bull of the Woods trail. This trail is a 1.8km out and back trail that links up with West Bay. It is a beautiful trail that meanders along the shoreline through lush forest with viewpoints and benches along the way. Fun tree identification keeps you guessing species around every corner. This is a lovely walk on the west side of town that offers views of Tahsis Inlet. 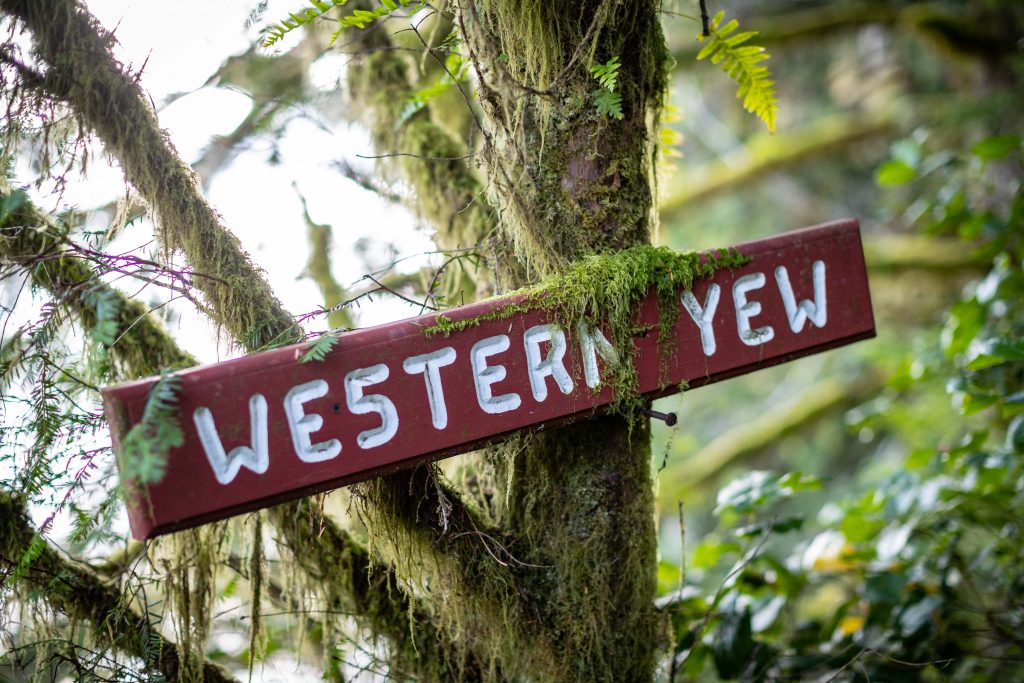 Back at the head of Alpine View Road is the Tahsis Heliport, and a very walk-able waterfront section that is popular with locals walking their dogs. There is an expansive panorama view of the head of the Inlet, lots of local marine bird life and convenient parking. The bridge close by is a great spot to view spawning salmon going up the river in the fall. Stroll down North Maquinna to the second bridge over the Tahsis River, another great spot to view wildlife, bird life, and spawning salmon.

This 2 kilometre long trail provides excellent wildlife viewing opportunities right on the doorstep of Tahsis. This route is a level trail with boardwalks and viewing platforms on the salt marshes and along the Leiner River where it meets the sea.

Wildlife often seen here include Trumpeter Swans, hawks, eagles, seals, salmon and bears. Many birds stop over here on their annual migrations. The trail access is from Tree to Sea Drive, just 500 metres from town and is well marked. There is a parking lot and washroom at the trailhead. This makes for an easy afternoon stroll close to town. 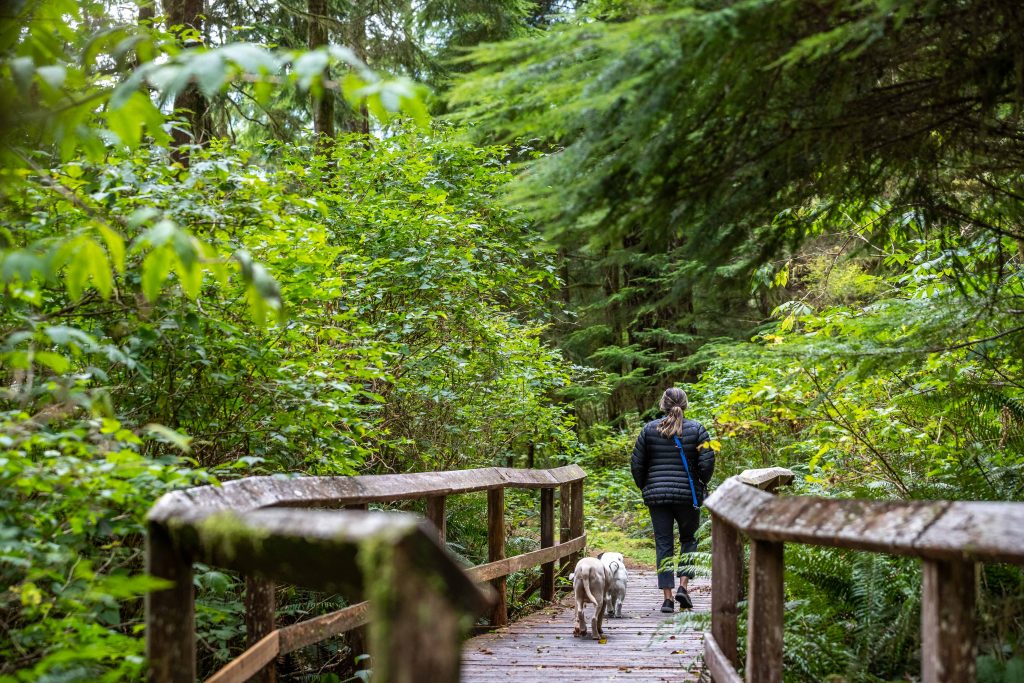 3km (2 miles) out of Tahsis towards Gold River and just before the Leiner River Bridge is the Leiner River Rec Site. Walk around and explore this section of the river, where it expands out into a picturesque little swimming hole with a rope swing. Follow the trail towards town to link up with the Leiner River Estuary Trail. 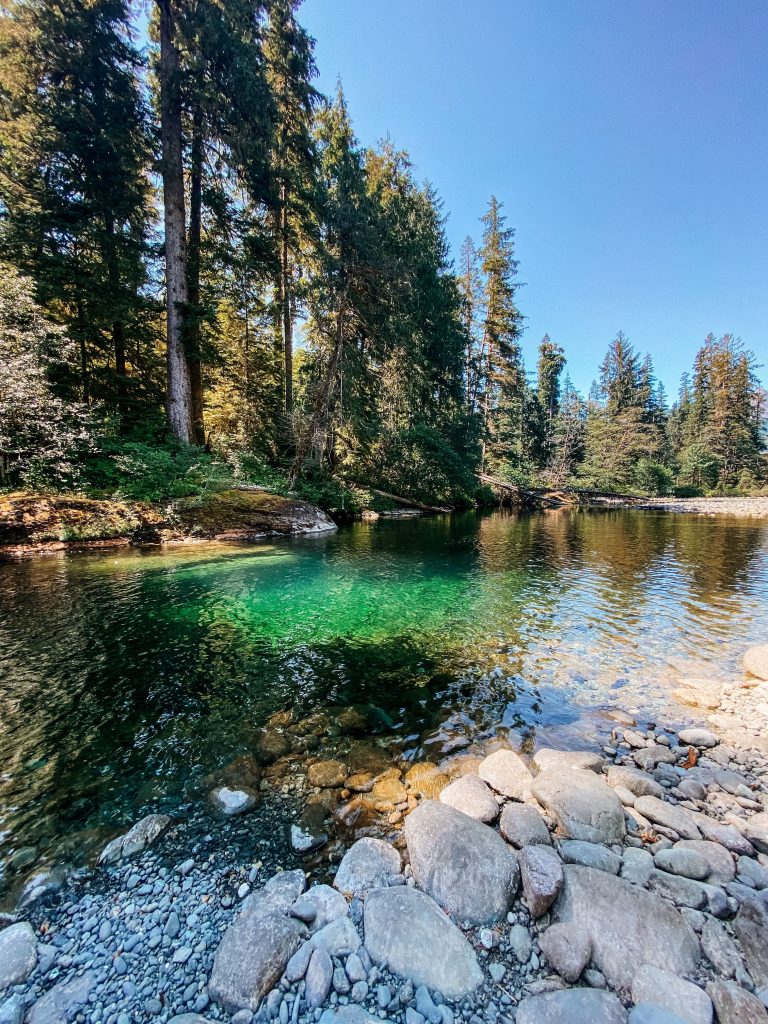 This short loop trail wanders along a scenic stretch of the Leiner River where rock climbers can practice their skills on the numerous house-sized boulders that litter the slopes of the narrow valley. No need to be an experienced boulderer, you can simply walk through and admire the sheer size of these rocks. At one point the trail passes through a short ‘cave’ between boulders. The Leiner’s deep azure pools are alive in the fall with salmon returning to spawn. Access to the trail is on the south side of the Leiner Bridge on the upstream right bank, off the road to Tahsis, just 3km from town. There is ample parking across the road. The loop walk is about 30 minutes long and is rugged with some rocks to climb over. 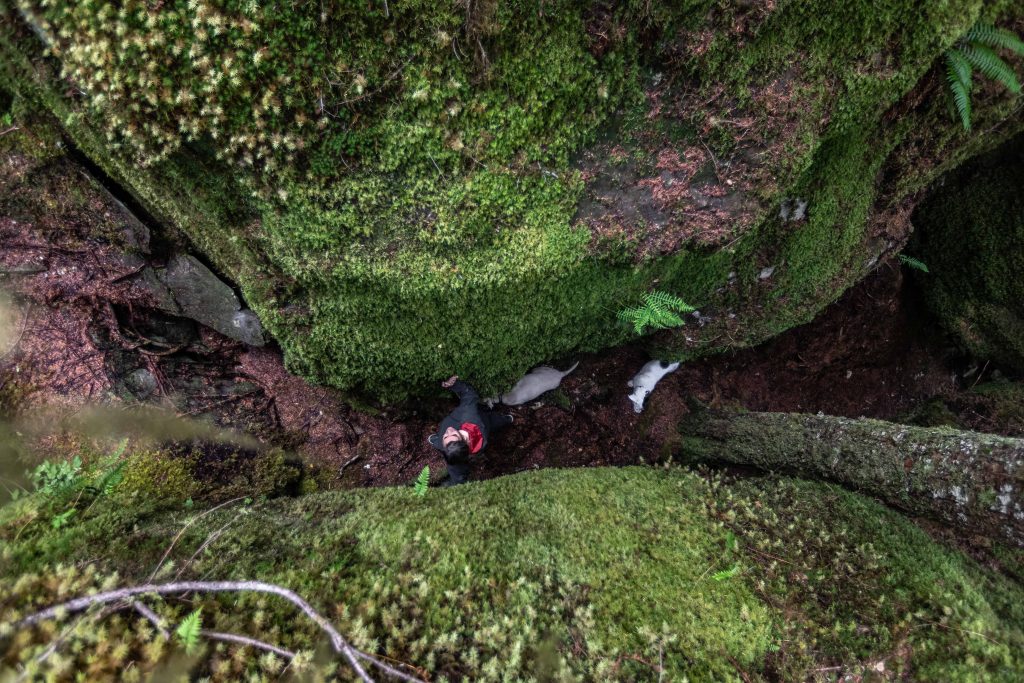